Blog - Latest News
You are here: Home / Financial Planning / There isn’t much you can do about the economy — keep focused on your Per...

Lately, I have had so many people ask me if we are heading into a recession. This seems to be the big question that is weighing heavily on the minds of some.

Last week, I was speaking with one person, who seemed to be thinking that this could perhaps be Financial Armageddon, and I asked, “Do you know what a recession is?”

She replied, “Not Really”. That’s why I am asking you.” Okay Fair point.

While some media headlines have suggested we are already are in a recession, lets take a look at what a recession is from a definition.

“A recession is a temporary period of time when the overall economy declines; it is an expected part of the business cycle. This period usually includes declines in industrial and agricultural production, trade, incomes, stock markets, consumer spending, and levels of employment. In purely technical terms, a recession occurs when two or more successive quarters (six months) show a drop in real gross domestic product (GDP), i.e., the measure of total economic output in the economy after accounting for inflation. In this sense, recessions are broad and can be particularly painful and challenging times for a country.”

A recession is simply when the economy slows down for at least six months. That’s it.

In Canada, recessions can also occur regionally because each province has exposure to different industries that are affected by different variables. A recession can occur in Alberta, for example, if the oil and gas markets decline, but not occur at the same time in Ontario if manufacturing and services remain steady, or vice versa.

Recessions do not occur very often because expansion usually occurs in the economy. Canada has experienced a total of five recessions since 1970 and twelve since 1929. Historically recessions have lasted between three to nine months; the most recent, the 2008–09 Global Financial Crisis, also referred to as the ‘The Great Recession’.

Recessions will occur over time, but they are not the financial Armageddon like the media portrays.  The reality is you might experience a dozen or more in your lifetime.

Keeping things in perspective, bad things do not just happen during a recession.  Let’s agree that economic casualties are bad irrespective of where we are in the economic cycle, and just focus on the concept of a recession for now.

So, if recessions happen as part of the economic cycle, and they are relatively short lived, what is all the fuss about? We know there will be some contraction in the economy but to be blunt, the 24/7 media machine needs to talk about something, don’t they?

Do you remember the Greek sovereign debt crisis? No? Well, not many people do. But did you know it lasted from early 2009 to late 2010.  For six months in 2009, Greek debt was the big story that everyone was focused on until the next crisis of the day came along.

Now, an economic slowdown is a little more complicated than just the fear of what might happen.

Right now, we are dealing with the worst inflation seen in 40 years.  Setting aside the crisis in the Ukraine, the surge in inflation we have seen since last spring largely reflects pandemic-related shifts in global supply and demand.

Looking specifically at Canada, we have three key elements that are driving inflation. The first is the global shift toward goods and away from services, combined with pandemic-related disruptions to supply chains. The second is a broadening of price increases to everyday items like food and energy, making it more difficult for consumers to avoid paying higher prices. And the third is the strength of the Canadian recovery and the overall balance between demand and supply in our economy.

We need to remember that measuring the economy is not instantaneous.  It takes time for these measures to work through the system which is why we hear some economists say we are already in a recession.  And since recessions might be as short as three months, a recession could be over before the official numbers come out.

So, what are you going to do about all this? Well, unless you run a central bank or a multi-national corporation, there isn’t much you can do about the economy. But what you can do stay focused on your personal financial goals. Tune out all the white noise and remember the 10 Truths About Investing. 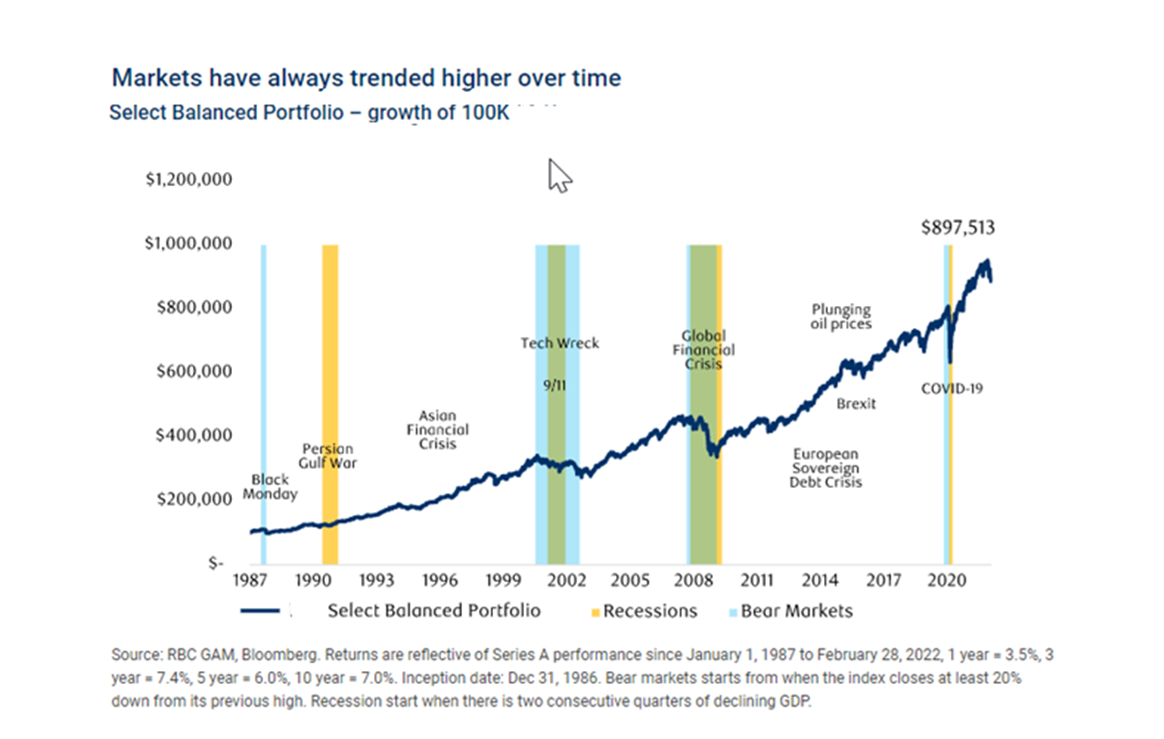 This article is intended as general information only and is not to be relied upon as constituting legal, financial, or other professional advice. Information presented is believed to be factual and up to date, but we do not guarantee its accuracy and it should not be regarded as a complete analysis of the subjects discussed. All expressions of opinion reflect the judgment of the authors as of the date of publication and are subject to change

The Basic Truths About Investing
Scroll to top